AI Fighters are a premium feature of Carriers that allows their Captains/Pilots to command AI-Controlled Fighters, instead of players.

As the name suggests, AI Fighters are controlled by an AI, and can be commanded by the Carrier's Captain to do various tasks via the Fighter Control Center.

AI Fighters, when attacking, or guarding a target, follow the same behavior as all AI Ships, only having exceptions when in command.

Fighters that you want to command can be selected via the ▼ Button on the far left, which opens up the Fighter Infoboxes, just below the Fighter Control Center, or if you want to select all Fighters at once, just click the All button beside it.

Fighter Infobox Section of a Carrier.

The Fighter Infobox Section tells you what fighters you have selected, commanded and the statuses of these Fighters.

If you want to deselect control of a Fighter, click the Fighter with a Thick Outline to deselect it, or click Idle on the far left to deselect all Fighters.

Note: Clicking Idle does not cancel whatever command they are following.

Commands are the basis of AI Fighters and without them, AI Fighters would be aimless on what to attack, guard or to do.

Statuses are important icons that tell you how much health your Fighter has, or if it's dead. Statuses are separate from commands and both icons can appear at once. 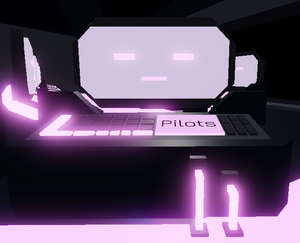 The supposed computer where you exchange Red Diamonds for AI Pilots.
Retrieved from "https://robloxgalaxy.wiki/index.php?title=AI_Fighters&oldid=98884"
Categories: