The Alien Computer is a Quest giver NPC for Quest #10 - Alien Computer. This quest is commonly known as the usage for the mysterious "Alien Parts" found from destroyed alien ships. The Alien Computer is a small interface inside a room with a resemblance to the interior of the Prototype X-2. The panel has an animated texture that shows moving Alien Script. Various areas can be translated to "Kneall" and "All shall fall before us." 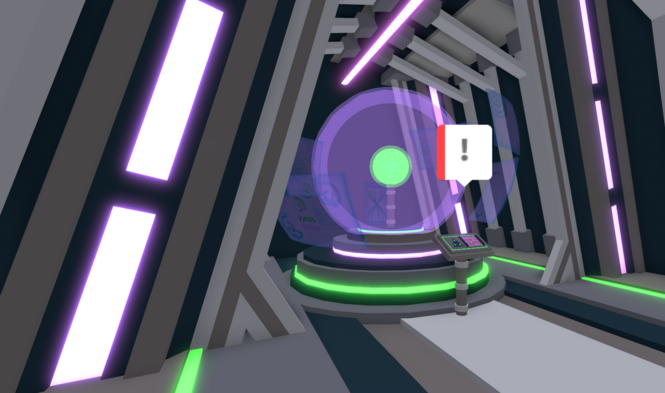 The Alien Computer can be found inside a stone structure inside the tunnels under Myriad III. These can be entered through a broken doorway inside the upper facility. Players can then fall down into the tunnels and go in a rough rectangle around the facility. At the opposite "long" end of the rectangle is a second hole in the tunnel ceiling similar to the one players enter through. This will lead to a stone door that opens to the computer room. A ladder to the computer is also added when the planet is upgraded to level 2, but the computer is present at all levels. The quest is never locked and can be started as long as Myriad III is present in the player's server. Alien parts always drop, regardless of whether the player has activated the quest or if Myriad III is present in the player's server.

Note that in the Dialogue, the computer is actually called "AlienQuest"

Player: "What parts do I need to fix you?"

Player: "Where will I find these parts?" or "No thanks, you may just be bad news."*

Player: "I will find these parts and fix you." or "No thanks, you may just be bad news."*

Player: "What will you reward me?" or "No thanks, you may just be bad news."*

*All quotations marked with an asterisk * will end the quest dialogue at that point.

The player must collect 5000 Alien Parts from destroyed Alien Ships to complete this quest.

Player: "Here I have them"

Red text appears in chat "You are missing the required items in your warehouse!"