The Centurion is a Destroyer class ship and one of the few ships to be armed with torpedoes.

Carrying a devastating torpedo, the Centurion is capable of making a tremendous impact in combat - provided it's not being shot at.

The Centurion is a Destroyer that has a long chassis and short, awkward wings and a variety of weapons. It has thrusters hanging on its wings, and phasers attached to the front. A Medium Torpedo rests on the bottom of the ship waiting to be fired. 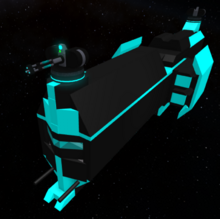