This Quest was made available just before the Halloween Event 2018. To obtain the Kraken, this quest must be completed. 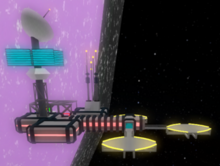 The image of the Lucifer station out side of Frion I

To begin the quest the player must travel to Frion I and arrive at the Lucifer Station. Head straight inside. Once inside, there should be a UNE soldier with an Afro you can talk to. The soldier named Zack Crustae tells you that the scientist next door lost the Kodiak to some pirates who apparently hijacked it. 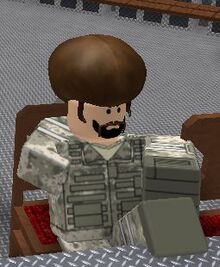 To begin the quest the player must talk to the NPC, Zack Crustae.

Zack: Pst, hey you, yeah you. You look like you could handle yourself. Want a job?

Player: What do you need me to do?

Zack: That stupid scientist in the next room lost our only prototype of the ship he was building for us.

Zack: Talk to him and give him a hand with whatever he needs so we can get build another.

Player: Can't you make your own?

Zack: No because we won't even be able to build another because the scientist refuses to show us the Activator Blueprints.

Player: What will my reward be?

Zack: I'll tell ya what mate. You help us out and I'll build a Kodiak of your own.

Player: i'll do it 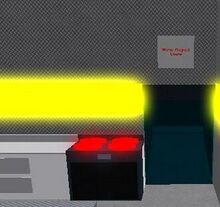 The entrance to the scientist.