The Devastation is a Battlecruiser class ship with heavy turrets.

While the design for the Devastation was eventually built upon to become the UNE's iconic Chimera-class Destroyer, it wasn't completely left behind. Even now, these ships still persist on the battlefield.

The Devastation is a Battlecruiser with emphasis on support.

Devastation is a long grey Battlecruiser that has an enlarged section in the front and four backside thrusters on the back. There is an flag with a bird on each side of the ship.

The Interior can be accessed by walking through the door, there is a chair that sits in front of a screen. On the left, there is an anime profile picture, possibly of Wiscyy, the creator of the ship.

Currently the model is slightly broken, with some parts being Partshifted. 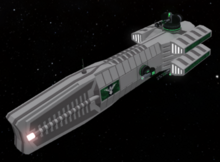