The Frenzy is aFighter-class ship modeled after the Fury. 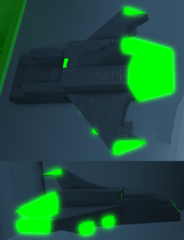 The Frenzy is a "stealth" variant of the Fury. It carries four Small Phasers, slightly less hull than its sister Fighter, and more speed. However, the Frenzy is a slippery Fighter, meaning it is very hard to control. It won't go in a straight line if you turn it too hard. People use it in swarms a lot, and it is hard to take out if it manages to get into a blind spot on your ship. It is carried on the Rhino.

The Frenzy's interior is the exact same as the Fury's interior. It is entered through the cockpit window and has a seat behind a steering column.