The Fury is a fast and readily available Fighter.

The Fury is a Fighter Class ship that is highly maneuverable and is able to deal around 200 damage to Shields with a well-aimed Phaser volley. It used to be available in the Stormbringer and Revelation, but has since been replaced their respective custom fighters following remodels.It can only be found now in a level 4 Mothership. A stronger variant of this ship, the Starbase Fury, can be found in the fighter bays of level 2-5 Starbases.

Fury Fighters are small and are about the size of a Wasp. Furies can fire a volley up to 4 Phasers through its 2 Phaser batteries. Its appearance is similar to that of a fighter jet.

The Fury's interior is entered through its cockpit window. Inside, there is a single seat behind a steering column. 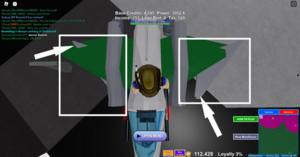