This ship is a VIP ship and can only be obtained if you own the VIP Gamepass.

The Galaxy is a VIP Miner-class ship and the 3rd best of its class.

Inspiration from the old colony ships in the dawn of the space-age, as well as the need for larger and more powerful miners led to the creation of the Galaxy-class miner. Miners of this class, though exceedingly rare, are said to be some of the most powerful ever created; capable of demolishing whole planetoids to fill their gargantuan ore holds.

The Galaxy is the 2nd largest, 3rd fastest harvesting (43 m3/s) and one of two Advanced Miner Class ships within the game (The other being a limited counterpart the Freedom Galaxy) with 2 Large Mining Lasers and 2 Large Advanced Mining Lasers. It takes a minimum of about 2 minutes & 46 seconds to fill up its Ore Hold.

The interior of the Galaxy can be accessed via teleporter on the docking ramp. This will take players to a small room with three chairs. The center pilot's seat faces three screens. To the left of the door that teleports players back outside the ship is a polygonal wolf/bear graphic.

The Previous model of the Galaxy 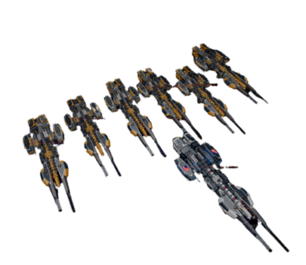 A Galaxy Swarm (plus a Freedom Galaxy)
Retrieved from "https://robloxgalaxy.wiki/index.php?title=Galaxy&oldid=103375"
Categories: