The Gideon is a Turret-focused Cruiser.

This is a slick Cruiser that you can hang out with friends in, or support a fleet in battle. 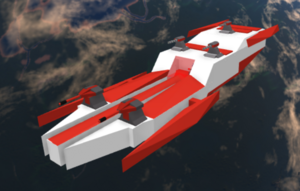 The Gideon is a low-cost, turret-focused cruiser with decent speed and maneuverability which makes it a good ship for escorting larger ships and fending off smaller ships such as frigates and fighters.

The interior contains a pilot's seat that you will see if you go through the entry door. Behind the pilot's seat, there's a very tiny passage leading to a double-seated sofa allowing you to transport 2 players. In front, there is a screen with "Oblivion" Written on it.