The Hasatan is a torpedo-armed Battleship and was the first ship to have a Large Torpedo.

The Hasatan is able to make full use of its armaments and torpedo to turn itself into a strong adversary against its opponents.

The Hasatan has a thin front that expands to a set of blast wings and wider thrusters on the rear.

It has a Torpedo tube-like decoration that houses a Large Torpedo.

The entrance has a teleporter that teleports the player to the pilot room which has three seats. The seat on the back is the pilot seat. 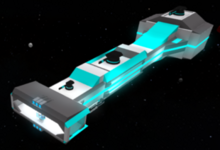