Purchase from the Galaxy Store during the Halloween Event 2018

Skaian Foundries' Kapisi is one of the deadliest fleet carriers on the market; equipped with twelve Bonehawk-pattern fighters, this vessel can unleash an almost unparalleled level of destructive power.

The Kapisi was an exclusive Carrier for those who contributed to or purchased from the Galaxy Store during the Halloween Event 2018.

The Kapisi is a mid-sized Carrier, and a reskin of the Sakala. It has a large bridge section and two fighter bays connected by transparent pathways. Each bay feeds into a central launching area that leads to the outside of the ship. The Carrier contains 12 Bonehawk Fighters.

Like it's original counterpart, the Sakala, he interior of the Kapisi consists of a teleporter that leads straight to the ships bridge (Which is inside the hanger of the ship). If you choose not to walk onto the teleporter, you would find yourself walking down a long pathway where you can see the Bonehawks. The left side of the carrier is exactly the same as the right site, excluding the ramp to exit or enter the ship. Inside each hanger (which consist of 2 Bonehawk Fighters), there is an array of seats so that people planning to pilot the Bonehawks may have a spot to sit while the carrier warps. 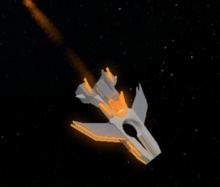