Jump to content
From Galaxypedia
This article is about the player-owned ship. For the Pirate Boss with the same model, see Kodiak.

The Kraken is an unstoppable siege engine that utilizes its torpedoes to quickly tear apart bases from unspeakable ranges while also having the speed and maneuverability to fend off other ships of its class.

The Kraken is a long range Dreadnought with powerful Turrets and equally powerful spinals.

The Kraken is an extremely powerful Dreadnought capable of dishing out enormous amounts of damage in a short time with its Spinals and Turrets.

This ship excels at Diving and destroying Ships with it's high alpha and long range, and powerful Spinals, as well as being excellent in Sieging.

Despite its firepower, the Kraken is one of the smallest Dreadnoughts, its size being as large as an average Battleship. The Ship has two large prongs in the front and an extremely large hollow torpedo bay in the middle, as well as on the front. Its has an extremely small cabin located on top of the ship. Behind it are its two large engines with 2 Antennas sticking out on each engine. It is black and grey in color with various neon parts.

The interior is a simple cockpit with a chair and computer with one of the thumbnails for the game on it. There is a very small box with the model creator's avatar on one of the sides. 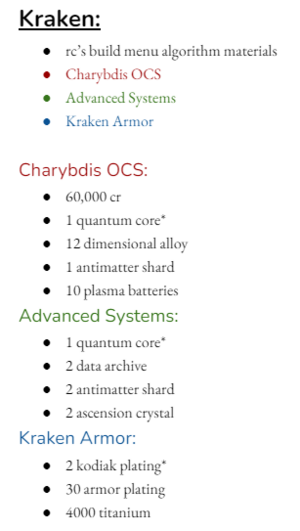 Listed costs for each of the quest items.