The Mega Base is a super-sized Starbase that was added in Galaxy Beta and is located in the center of the map. It is where players spawn upon entering a server or when their own bases are destroyed, go to build ships, access their Warehouse, and buy or sell materials at a steady price. The Mega Base used to be entirely invulnerable and had an inordinate "1e22" (10 sextillion) health. However, as of version .73f, the Mega Base has 75% Damage Resistance and 50,000 shield and hull health. The Mega Base is unarmed and neutral to all player factions. If it is somehow destroyed (e.g. Aliens), the server will shut down.

The Mega Base follows similar docking rules to Faction Starbases, allowing Miner or Freighter-class ships to become invulnerable while safely docked, though this invincibility wears off when the respective ship becomes undocked or engages in combat. Ships of any class cannot be spawned at the Mega Base except for ships under battlecruisers, and although non economy-related ships may still dock, they do not benefit from any sort of invincibility.

The Mega Base's ore storage, credits and prices are linked across all servers, even private servers. This also means that the credits at the Mega Base often fluctuate between positive and negative totals; during times of debt, players cannot sell any items from their warehouse to the base and are alerted with the message "Base does not have enough credits to buy this."

The Mega Base when it had 1e22 health

The Mega Base has a total of 16 terminals and 5 "sub-terminals". Each sub-terminal has either 3 (if on the main floor) or 4 (if on the lower terminal E) docking terminals in it. In the center of each of these is a pad that teleports players to the main hub. On top of terminals A-D are rooms labeled on blue signs.

In the center of the Mega Base is a room known as the hub, which is the location of the Galaxy VIP Lounge, a glassy building with a sign saying "VIP Lounge". In the center of the hub is a pillar with some teleporters which all take players to the "sub-terminals". One, however, leads to an upper observatory. The pillar itself contains 4 screens which all have some sort of message on them.

Above the Galaxy VIP Lounge is the Admin Lounge. It contains images of all the Admins doing a pose and has some chairs and tables. Players can get there by using the ladder to the right of the Lounge.

There are also two large signs that cycle through four different "ads". Players may use robux to purchase their own ad slot to display any roblox group/place they choose (within the limits of roblox filters). Ads may be displayed on rotation for 1 day (50 robux), 3 days (100 robux), or 7 days (200 robux). These were formerly used only by game staff or developers to launch their own game-related messages or ads, which included ones for the Galaxy Group, Case Clicker, Sean's Empire, and Xeiron Industries. The Case Clicker ad read "Come play the best Sci-Fi game around!". This was probably based on rcouret complaining that Case Clicker is categorized as a Sci-Fi game.

About every 2 minutes in the Mega Base, you can hear what sounds like a robot speaking on an intercom throughout the Mega Base. These are all of the sentences she says. 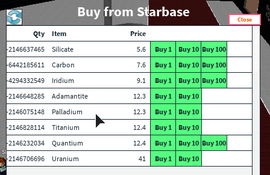 Grievion inside the Mega Base

A board that advertises The Galaxy Wiki In-game 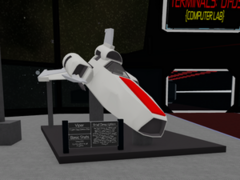