"The Battle of YES"

"The Battle of YES" was not so much a battle as it was a slaughter. Lost Souls (LS) had decided to quit Galaxy and was nuking all their ships - including event ships - in public. This "bootleg admin event" took place on March 3, 2020, and saw the destruction of a Ghoul Nyx, a Deity, 3 Patriotic Rorquals, an Azreal, and many more event ships, as well as many dreadnoughts. The amount of players warping on the lazily positioned ships created tremendous lag, causing some warp cooldowns to be ridiculously high. A fair nickname for the event is a "Late Christmas Present from LS."

Roundstats after the nuking was over:

"Rampage of Hyperant" was a large nuking event that occurred on September 3, 2019. zleftr, using his massive wealth, nuked 36 million Credits worth of Hyperions and every other Super Capital Ship, causing massive destruction within the server. Even a Ghoul Nyx was not spared as it and many other ships fell prey to the Super Capital Ship spam. In all, 21 million credits worth of Ship Materials were destroyed. 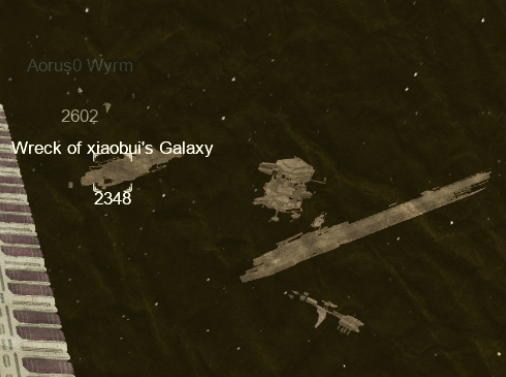 Wreckage of one of many ships destroyed.

The "Battle of High Seas" was a confrontation between TFF (The Federal Flame), SC (Solar Crest), and CI (Cobra Imperium). SC and TFF gathered a huge swarm out of range of a CI base, ending with SC + TFF's victory. Countless ships were lost, including Spectres and other small ships. Later on, TFF + SC were victorious due to their Dreadnoughts positioned above the enemy base, pinning them down if they spawned. In the end, CI's base was destroyed.

The ".Skill Urself Prototype Campaign" This event was by far one of the most destructive events in Galaxy. The elite group .Skill Urself gathered up the largest amount of Prototypes ever seen in Galaxy's timeline and went on a full-on war campaign for two weeks destroying every other Prototype in sight.

Many people have never fully recovered from the devastating campaign led by MasterPlural, and the campaign wasn't stopped until the Loyalty update was introduced.

The "Battle of Krukis" occurred on November 19, 2018. It was a massive engagement between The Holy Kryuvian Empire (KE) and Cobra Imperium (CI)/The Cultists (TC) /Vanguard Coalition (VC) which resulted in the destruction of 3 Andromedas, a Nyx, and countless other Battleships. No losses were reported on KE's side. It was thought that a Wasp with New Player Protection was supposedly used to distract Aqueous so KE could siege, however, it was most likely an independent player, as most KE members had no knowledge of such a tactic. CI withdrew from the battle before they could lose any major capital ships. The Nyx's explosion captured the planet, leading to KE's victory.

The "Battle Of NONI" occurred on November 3, 2018. It led to the destruction of TubaDawg's Ghoul Nyx and the victory of TA.

The name "NONI" originated from the name of the Starbase TA was using at the time of the battle.

CI was responsible for the destruction of TubaDawg's Ghoul Nyx.

The "Battle Of Midway" was a battle that led to the destruction of Falloria's Prototype X-1. This was a major victory for DNE.

This battle strategy was to swarm the Prototype with Leechers, which were "Meta" at the time.

Irfaan1997 was the commander of the fleet. 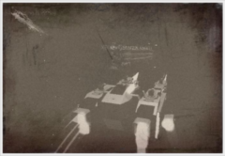 The first responders of TA/Cobra Imperium

The "Battle Of Intrépide" occurred on November 4, 2018, and caused commotion between TA/Cobra Imperium (CI) and the Vanguard Coalition (VC). The battle was slow-paced and was mostly argumentative. There was little ship-to-ship combat to begin with. Eventually, irfaan997 showed up to end the fight and lead his group to victory!

This fight comprised of Spectre swarms pitted against a Prototype X-1. The Prototype was never destroyed in the process as the damage of the Spectre wasn't enough to hull it in time.

The "Bombing On Frion" was a battle between Cobra Imperium (CI) and The Holy Kryuvian Empire (KE). KE attempted a bombing tactic by building Meteors and intentionally sacrificing them near opposing ships or bases to cause explosion damage. This was a success but wasn't enough to stop TA from finishing off KE's final Starbases.

Two Prototypes were used in this battle. None were destroyed.

Start Of The Great Toxicity War

Cobra Imperium in open combat with the Vanguard Coalition

The "Start Of The Great Toxicity War" is a battle that triggered an official war with Vanguard Coalition (VC) and Cobra Imperium (CI). The "cheating" scandal was assumed to be the cause of this battle. CI barely won this battle, and some claimed that VC won because they suffered fewer ship losses. Many people thought that this would spark a serious full-on war between the two factions, but it never came.

Cobra Imperium fleet docked at the Mega Base

The "Battle Of Orto" occurred on November 7th, 2018. This battle was very destructive, as many ships were lost on both sides. The overall winner was the Vanguard Coalition (VC). The reason for Cobra Imperium's downfall during this battle is because they lacked members due to them leaving towards the end.

Outpost 18 is a retired group who created the Dramiel, which is now one of the only things they are remembered by. For one day, they declared war on all galaxy groups at the time and had a massive battle which destroyed many Dreadnoughts, Battleships, and Battlecruisers. Not many people still remember this battle. 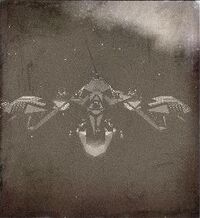 Image of the Cyber Leviathan that was lost.

The Battle of "Hit or Miss" was a small skirmish between The Holy Kryuvian Empire (KE) and Cobra Imperium (CI). The CI Fleet Commander rounded up a ragtag fleet of Razor Wings to combat KE. This battle lasted for two hours and resulted in Cobra Imperium losing three Dreadnoughts, one of which was LordZeloxy's Cyber Leviathan. A breakdown of communication in the faction's voice call caused the ship's destruction. Despite these devastating losses, CI was able to drive KE out of the server.

Two Prototypes from both sides were used during this battle, but none were destroyed. 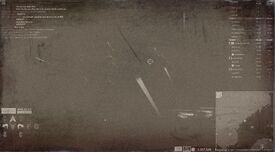 A photo of the Great Wraith Migration

The "Great Wraith Migration" was a tactic employed by Omega_BombaKinxq and LordZeloxy during a skirmish between The Cultists' (TC) and Cobra Imperium's (CI) combined forces versus The Holy Kryuvian Empire (KE). The two leaders spawned their respective Skeletal Ghostealis’ and docked them at the TC base. They then flew 14 Wraiths over to the KE base and began a siege. KE warped past the fighters to The Cultists' base and opened fire on the Skeletal Ghostealis, hulling them quickly and forcing them to be despawned, but not before the Wraiths heavily damaged KE's base. In the battle that ensued, TC and CI's combined forces ended the game and drove KE out of the server. 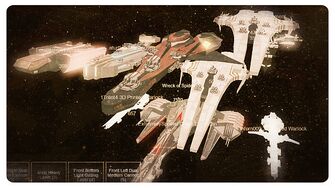 The "Battle Of Kaga Noto" occurred on April 3, 2019. This battle was held between Cobra Imperium (CI)/Atomic Legion (AL) and The Aqua Order (Aqua). Both forces were relatively matched but CI's eventual victory may have been due to the fact that they possessed greater numbers of event ships compared to Aqua.

The "Attack On Kryuvian Empire" was a battle that occurred on April 3, 2019. This battle was a conflict between Cobra Imperium (CI) and Crimson Nightmare (CN) against The Holy Kryuvian Empire (KE). Supposedly KE had major capital capabilities including the user Feraligatr001's account which supported them with an Osiris, but CI and CN fought back and took victory!

According to many users in this battle, this fight is a start to a new chapter in the Galaxy history.

The Harvest King Proto Nuke (unofficial name) was an event which occurred in October 2018. During the event, user xiaoxong lost their Prototype X-2, taking out the Harvest King that attacked it, along with several Dreadnoughts and any other ship unlucky enough to be in the blast range. Unlike most other battles listed here, this was an incident involving a collaboration of players against a common enemy.