The Naglfar is a Dreadnought with high maneuverability and speed.

The Naglfar is a Dreadnought with a rather balanced loadout and very high maneuverability that allows it to be a decent ship against brawling other Capital Ships.

The Naglfar has a long and thin profile for a Dreadnought. It has a mostly grey colour with numerous armored details around the ship. Its most prominent features are its extremely large spinal barrel, which spans almost half of the ship, and its two big fins on the back of the ship. In the middle there can be found a small airlock door, and below that door is the text, "DEATH TO UNE", similar to the one found on Nimitz.

Its interior is just a grey box. 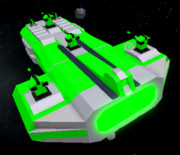