This ship is classified as a Super Capital. It is one of the most powerful Capital Ships and can be built on the build menu.

A heavy assault super capital of the Osiris Navy. Has a focus on rapid fire turrets.

The Oblivion is a powerful all-rounder Super Capital Ship. It is the third Super Capital to be added to the build menu. Its high health and high damage output allow it to take on most enemy ships effectively.

The interior of the Oblivion is a small circular room containing three screens, a trash can and the pilot's seat. There is a secret teleporter next to the trash can that leads to a secret shrine dedicated to Elon Musk. 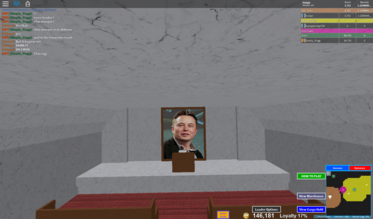