From Galaxypedia
(Redirected from Ores)
Jump to navigation Jump to search 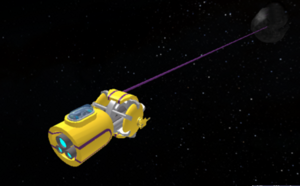 Mining is one of Galaxy's core functions and is one of the roots of the economy in Galaxy. Its one of the main sources for Building ships and Gaining credits. Though mining is considered to be tedious, menial, and a grindy job in the game, as it requires lots of patience for average pay, at least for new players.

Mining has several advantages over other Money Making strategies, the paramount reason being the easiest and most accessible way to grind for ships and credits, especially in a VIP Server. However, mining has several drawbacks, the standouts being that many miners are slow and take a long time to fill their holds resulting in long and boring trips for small payouts. In addition, miners are vunerable to Pirating when their Faction is in a war.

Mining also adds to your score every time you dump or sell ore.

To mine, just get a mining ship and click on an Ore's name box, it will light up and then when you click on the buttons for your Mining Laser/Turrets, or press their hotkey, they will start to mine, if they are in range. After a while either your Ore Hold gets full or the ore disintegrates. If your Ore Hold is full, find the nearest friendly Starbase, preferably your own team, and dock, then open the Menu and click "Dump Ore". There are two options for what to do with your ore: Selling (You give the starbase the ores and you get credits in exchange) and Transferring (The starbase refines the ores and transfers most of them to your warehouse).

In Mining, there is a dedicated class of Ships called Miner Ships. Miner Class ships are solely used for mining Ores. These ships do not have any form of dedicated weaponry and tend to be slow, and have no damage resistance, which makes them extremely weak against attackers.

Ores are rocky materials used mainly to build ships and the make credits. These materials are a core part of mining.

Ores have a mass which is measured in Cubic Meters, which, in Galaxy, is a measurement of how much space the Ore will take up in a ship's Ore Hold, Cargo Hold, or in a player's Warehouse. This is something to keep in mind when Trading or Mining because it can affect the amount of money players make.

Each Ore mined spawns a new Ore somewhere in the server, however, when a server is in Endgame status, Ores will have their spawns disabled, though ores will start spawning again if there are more than 2 Factions in Endgame state.

All ships in the Build Menu (excluding the Wasp and Wyrm) require at least some Silicate, Carbon, and Iridium. Higher tier ships require Adamantite, Quantium, Titanium, and Palladium as well as Uranium.

Common Ores; Silicate, Carbon and Iridium are found commonly scattered throughout the map of Galaxy. These ores also spawn in a large cluster near Starbases and Planets.

Rare Ores; Adamantite, Palladium, Titanium and Quantium, are only found in what is called a Quadrant. A Quadrant is any of the four parts into which a plane is divided by rectangular coordinate axes lying in that plane. In this case, axes that separates the Quadrants is called a Dead Zone, in which little to no rare ores can be found. More explanation can be found below.

Uranium Ore; Uranium Ore, a unique type of ore, is found scattered all around the map just like Common Ores, but is much more scarce and harder to find. 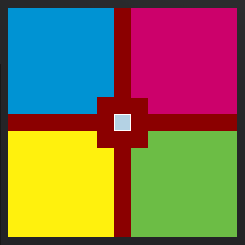 In the image shown on the right, the map highlights the 4 Quadrants on the 4 Corners and the middle square being Mega Base, these are where Rare Ores of each type spawn on each one of quadrants. The Red Zone shows where it is not possible for Rare Ores to spawn. Keep in mind that 2 Types of Rare Ores cannot spawn at the same quadrant (e,g Palladium and Quantium at the same time cannot be on the magenta quadrant).

Note: Rare Ore types are not fixed in 1 Quadrant, instead they are randomized after each round reset or server reset.

Loyalty is a large part of mining because it affects how much ores you receive during every dump.

The payout of ores increases with higher loyalty:

Mining is used to bolster the territory of a Starbase/Planet, and make it rapidly expand often for many reasons including assimilation, Starbase Income, or pushing to Endgame early.

There are several Money Making strategies which can give more than normal mining, and can be found in the Money Making page.