The Orion is a heavy Cruiser, borderline battlecruiser made by the U.N.E. that has very high health for a Cruiser, decent Spinal damage, and light turrets in case any small ships attack.

The Orion was one of the earliest UNE ships. Developed during HX1, it inevitably became outdated as technology advanced. The surplus that are still sold to this day are widely bought as escorts since, while comparatively weak, they are cheap.

The Orion is a slow Cruiser. It carries 2 Small Lasers and 1 Medium Laser, it is capable of good Spinal Weaponry use, but is slow for a ship of its class.

On the back of the Orion is a teleporter that leads to a small room which contains nothing but the pilot's seat. The current model is partially broken due to an admin deleting several ship meshes. 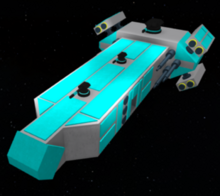