The Permafrost is a Destroyer-class ship added during Galaxy's 2019 Christmas Event.

The Permafrost is a Destroyer capabe of inflicting major damage onto other ships.

This ship excels at providing firepower support in fleets and diving ships with its insanely high firepower. It is able to effectively evade fire and dish out extreme damage with it's speed and agility in many situations. 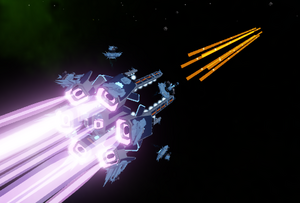 The Permafrost is a rather, large destroyer that has a unique shape, resembling other previous event ships like the Grim. The cockpit is a small cabin located inside a ring of arms and many turrets orbiting around it. The ship's detailing also has icy spikes around it and there are snow/ice particles seemingly flowing to the cabin.

The interior is a small cockpit with a detailed, icy chair, and 2 control panels displaying the text: "Making a List..." and "Checking it twice...".