Jump to content
From Galaxypedia
(Redirected from Prototype X1)

The Prototype X/1 is a battlecruiser which is a downsized replica of the Prototype X-1 created by the U.N.E and the Osiris Shipyards.

The prototype to what would have become the Colossal Titan. This Proto-Titan is the culmination of the minds of UNE and the Osiris Shipyards.

The Prototype X/1 is a miniature version of the Prototype X-1 with much weaker stats but very high maneuverability. It uses the same model but otherwise behaves like a Battlecruiser with its decent DPS and size.

The interior matches the original Prototype X-1, with a miniature hallway leading up to a miniature pilot's seat that the player almost completely covers up while sitting on. 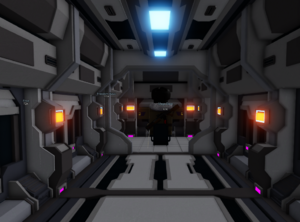