Rev is a quest NPC found in the interior of Frion I that gives players the weapon part in exchange for a large amount of materials. He is dressed in a historic Earth uniform that bears some likeness to those seen in Soviet-era Russia, with a star on the belt buckle and a red and silver badge pinned to the left pocket. Two flintlocks are attached in an "X" shape to his back, and he wears a slate grey "bucket" helmet with a chin strap.

Rev can be found in the lower interior of Frion I near the cliff that Collins stands on. As was the case with Collins, this quest may only be accessed once Frion I is upgraded to level two, which enables a teleporter near the top tower that takes players to the interior space below the main starbase/spawning zone.

[Rev]: "IM ASKING IF YOU WANT A WEAPON PART"

Quest #206 "Rev's Irresistible Offer" is given to the player.

[Rev]: "do you have everything"

Weapon Part is added to the warehouse

Rev in the Kneall Event (Dialogue)

Rev is also found on the top of the portal of the Kneall base, Where he gives out the quest for the Onslaught. 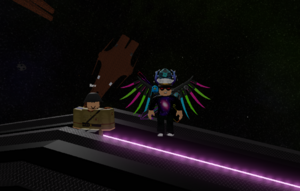 Here is his dialogue: Rev: KNEALL

Player: Yo Revy what you doing up here?

After that, you are given the quest for the Onslaught.

When the items are given:

After the dialogue, the player is given the Onslaught.

The quest requires 200,000 Credits to complete.