Richard Kavar is seen in a slumped over position next to a glowing interface station. His suit is also covered in various glowing readouts, unlike the relatively plain suits seen on dead personnel inside the Abandoned U.N.E Base. 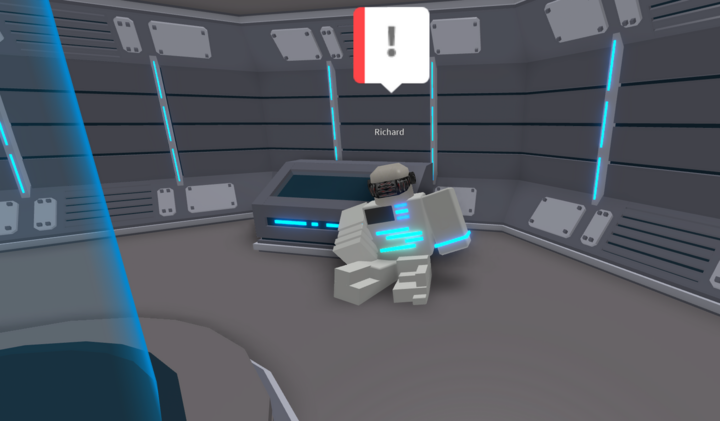 Richard Kavar can be found inside a "secret" research lab inside Myriad III's moon, Duna'kaé. The quest is never locked and has no prerequisites other than having some form of transportation to the moon. The quest also comes with an optional pre-quest dialogue from the Monogram, which is unlike any other quest in Galaxy. 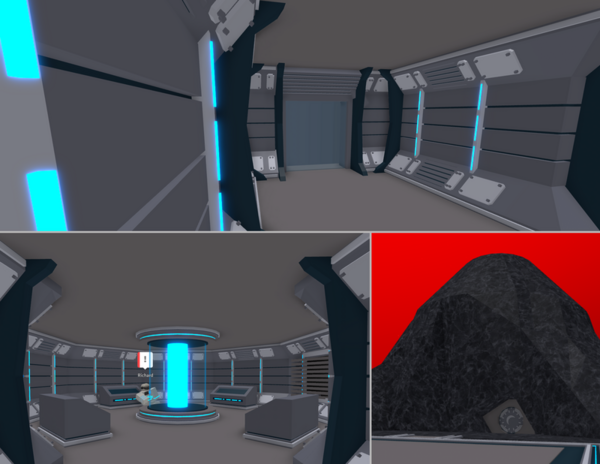 Monogram: "User Richard Kavar is dangerous and is currently wanted for the murder of his 2 co-workers, he is armed and is suffering // from PTSD thinking he is being hunted by Kneall and Red Ice [withdrawal]"

Player: "What the hell happened here"

Monogram: "During the fall of the body known as "Myriad III" Richard became distressed as the horror that happened on the surface and took // a shuttle down, his mood has been down ever since"

Player: "What exactly happened on Myriad?"

Monogram: "Kneall attacked the colony, the [remnants] can still be found on the surface"

Player: "What about his co-workers"

Monogram: "Due to the fact that the facility was not harmed, he convinced himself that his co-workers were Kneall, he killed them and their bodies out the door, what happened after that is unknown"

Player: "Can I talk to him?

Monogram: "Go ahead, he is currently in a somber type ramble, his is still armed however"

End Dialogue. Note that the dialogue is kept as similar to the real in-game text as possible. Grammar and general English mistakes are present to maintain similarity to the true dialogue. The same remains true in the Main Dialogue.

Richard Kavar: "They wont come will they, will they? Surely not, I got rid of the traitors, may whatever is after hav-"

Richard Kavar: "WHO ARE YOU, YOUR AN ALIEN ARN'T YA, HERE TO FINISH THE JOB?"

Player: "Woah there im not an alien im here to help"

Richard Kavar: "HELP? DOES IT LOOK LIKE I NEED HELP? IM FINE, GET OUTA HERE I DONT KNOW IF YOUR ND ALIEN, HOW CAN YOU PROVE IT?"

Player: "The door to get in, only allows humans"

Richard Kavar: "you..., You are right, there is no other way in, but what are you doing here"

Player: "I came here to help"

Player: "Your here all alone on a moon"

Richard Kavar: "You know maybe, I might need some help I need some items, silicon and some [hard drives]"

Richard Kavar: "yeah... yes yes them, I need them can you get them for me, I can finish my work here before the monsters come [back]"

Player: "Is there anything I can do to help?"

Richard Kavar: "That will be all, HURRY before they come back I know their coming, HURRY HURRY HURRY"

Richard Kavar: "There should be a base, very safe, monsters wont go there, they may sell some"

*All quotations marked with an asterisk * will end the quest dialogue at that point.

The // marking indicates that a second chatbox is required for the entire dialogue to show.

The player must collect 1000 Silicate and 3 Data Archives to complete this quest.

Richard Kavar: "Well? Do you have what I asked for, if not get the hell out"

Player: "Yes here they are"