The Starblade is a cheap torpedo Frigate.

Made by the Shining Shipyards, the Starblade was made for quick hit and run missions.

The Starblade is a small Frigate that is armed with a set of Tiny Phasers and one Small Torpedo. It is great for taking on slower and larger ships because of its speed and size.

The interior of the Starblade is extremely small. It has the pilot seat in the back with a joystick in front. 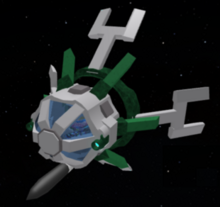