This ship is a Stealth Ship. It is an extremely fast, low health ship that has stealth technology, making the ship appear transparent and its icon invisible on the minimap.

The Stealth B-2 is a Stealth Battleship and the second ship of its class.

The Stealth B-2 is a rather small, sleek Battleship that is nearly invisible even against the contrast of a Starbase. It has a design inspired by real life American B-2 bombers, however the ships design is quite hard to see due to its invisibility.

This ship excels at diving Ships with it's high alpha and long range, as well as being excellent in Sieging for the same reasons. 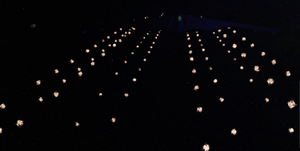 The Stealth B-2 is a Stealth Ship, making it's model appear transparent, being nearly invisible in plain sight. The shape of the ship is based off the B-2 Spirit Bomber that also features stealth technology. The ship has a flat, but wide profile, with wingspan being extremely long. The torpedoes have small trails coming from them when moving fast.

The Interior is a small, empty room with a seat on the middle, but is difficult to spot.