The Stormbringer was the first Carrier to be added, introduced in version .40, and has received 3 remodels.

When the darkness washes over you like a stormcloud, you know this mighty carrier has arrived.

Said to bring a legion of fighters which strike like lightning and devastate enemies, this hulk is a force to be reckoned with.

The Stormbringer is a pretty well-balanced ship in terms of weaponry. While the turret armament is focused on lasers, the ship also possesses 2 medium cannons for dealing damage to a ship's hull once an its shield has been shredded by the vast laser array. The Stormbringer can be considered the shield-breaking counterpart of the Borealis, another carrier. Relationships like these have been seen before, like the Hawklight and Warden, for instance.

The Stormbringer's bridge is exceedingly basic, being a plain grey cuboid-shaped room with a single wool-textured pad on the floor that acts as the pilot seat. Don't worry, the ship building hangar is working on building the interior right now. The fighter bay is a small, cramped little dark grey compartment that opens out of dorsal side of the ship near the stern, housing the fighters. There are neon white accents on the floor underneath each fighter, perhaps outlining landing pads. Overall, the fighter bay is vaguely resemblant of that of a real aircraft carrier, except it is dug into the ship and blanketed over the top by a transparent shield-like surface. The ship itself is very long. Most of its surfaces are littered with armour plating in various shades of grey and streaks of neon orange, except from the ventral side, which is host to a number of vertical protrusions. The most notable of these protrusions looks rather like a hydrofoil's foil. It is also reminiscent of the massive vertical protrusion on the Borealis' underbelly. 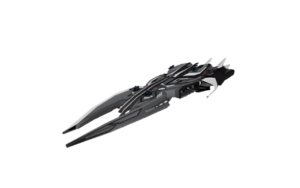