This event is the result of a potentially controversial incident within the Galaxy community. When adding information to this page please write from an unbiased, third-person perspective; and only include factual information.

This article documents the events that lead to the demotion of Sugondese from Developer rank.

On Sunday November 7th 2021, Sugondese ("sugon") was in the Galaxy Discord Server's General Discussion and was having general conversations. This was until ASD (a well-known community member and former admin) sent a message saying that he was moderated in the FoB (Field of Battle) Discord server for having a swear word in his custom status. This reminded sugon of how strict the moderation is in the FoB Discord. So sugon, already being in the FoB Discord Server, started to have a debate with their community regarding the server's rules. At some point sugon said "Would I get instantly banned for saying the sh word?" to which he was given an answer by the Admin Director of FoB Blackprincess. A few minutes later he was warned by a moderator for that message, the warning being for saying "sh word" in his message which references a swear word. Sugon found the warning hilarious and made a big scene about it as a joke, Blackprincess convinced sugon to take it to dms where Sugon wrote a big message with the purpose of appealing his warning, which worked. However sugon designed the message to be a copypasta, so he sent it in the Galaxy Discord Server's #misc-dev-channel.

Sugon when he noticed the Community raiding, announced 3 times to stop raiding and to leave the discord alone. The community stopped but by the time they stopped it was too late, Blackprincess had locked down the FoB Discord Server and deleted all of the invite links. Sugon felt bad and Direct Messaged Blackprincess apologizing for the situation. Sugon informed Blackprincess that he was actively discouraging the raiding and was not encouraging it. Sugon and Blackprincess worked things out in dms. 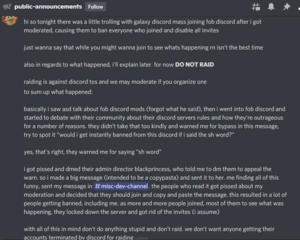 However, on the morning of November 8th 2021, sugondese was demoted by rcouret.

A lot of the community was put into dismay by the demotion of sugondese, as he had a lot of ambitions and plans for the game, most of which the community were desiring for years. A new movement called the #BRINGBACKSUGON2021 Movement was started, and is what caused the BRINGBACKSUGON2021 Incident where former developer XxChaoticStrike used webhooks in the Galaxy Discord to constantly ping @everyone with a pedophile accusation against a staff member and other NSFW content/messages. Sugon was left without a developer role for around a month until one day, rcouret decided to make yname a developer. But when he did that, he also made sugon a developer again.