This ship is classified as a Super Capital. It is one of the most powerful Capital Ships and can be built on the build menu.

Known as the "Glass Cannon" of the Galaxy, the Theia has great Turret and Spinal DPS but not the best tank or very maneuverable

The Theia is a PVP ship capable of dishing out enormous amounts of damage in a short time with its Spinals and Turrets.

The Theia is an extremely long and slender Super Capital Ship that has many defining features including its "Power Core" located visibly in the middle of the ship as a large blue orb and 2 engines accompanying it on the sides. Its long Spinal barrel in the front taking almost 1/3 of the length of the Ship. An extremely large single engine located at the back of the ship almost being as large as its spinal barrel. The overall appearance of this ship makes it look like a large gun with engines attached to it than a ship.

The Interior of the Theia is a rather small but detailed room. When you first enter, it has a stairs with two Computers beside that lead to the pilot's seat. Inside the pilot seat room, there is a large black screen with the logo of the Event Horizon Shipyards on each end of it citing its Manufacturer. It has the same color scheme as other ships by Event Horizon Shipyards such as the Osiris. 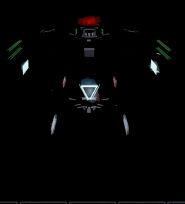