This article describes the NPC ship. For the player-owned equivalent, see Subjugator.

The UNE Subjugator is an U.N.E. AI Super Capital Ship and one of the largest AI ships in the game.

An older variant of the UNE flagship.

The UNE Subjugator is a passive, U.N.E affiliated ship that is the equivalent of a Super Capital and one of the tankiest ships in the game at a total health of 35000 and 65% damage resistance.

Only a maximum of 2 spawns in a public server.

It is seen and spawns at the Mega Base guarding it and It will attack Alien and Pirate ships if they get too close. It is able to call other U.N.E. ships to assist it in combat, similar to a Punisher.

It will leave it's guarding post to respond to other U.N.E ships' call for aid. Once the target is destroyed, it will return to Mega Base.

Note: UNE Subjugator, along with all other U.N.E ships do not spawn in private servers. 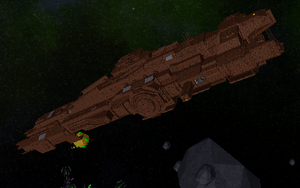