A powerful and cheap battlecruiser, Skaian Foundry's Vansnova is designed above all else to deal enough damage to destroy its target before the target destroys it.

The Vansnova is a PVP ship with an energy orb in front. Its firepower comes from its energy orb that is armed with 5 Large Cannons and 5 Large Phasers. It is a Spinal-only Battlecruiser.

The Vansnova has no interior, you just go through the cockpit. 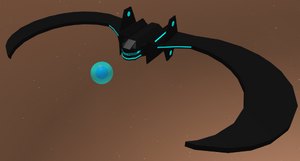