A) Directly buying them from the Mega Base into your Warehouse.

B) Using a trade ship to transport materials from your home base or wrecks to the Mega Base and transferring the items directly from the ship to your Warehouse.

Once the correct amount of Materials is in the Warehouse, ships can be purchased, as long as you can also pay the up-front manufacturing fee.

Warehouses are upgradeable, with each level increasing the total storage available in your Warehouse as shown in the table below.

The New Player Protection in Galaxy is directly dependent on Warehouse levels. A player is titled as a "New Player" if they have a level one Warehouse. If a player has this protection, you cannot attack any of their Miner or Freighter-class ships. Once a "New Player's" Warehouse is upgraded to level two, all of their ships become vulnerable to player attacks. The warehouse automatically upgrades once a certain number of credits is reached, saying that, "Congratulations! You are no longer a new player!" upon rejoining.

Prior to the Warehouse update, ships were built using materials deposited in your own Starbase. All of the ore that Miners brought in were stored in a base's "Cargo hold," as it were. It was almost impossible to get a Dreadnought unless you locked a faction and played for 3+ hours in order to collect that much ore uninterrupted, not to mention the considerable manufacturing cost of making such large ships back then. Because ores were not purchased, players essentially had to pay the full price in their own credits in one straight purchase, rather than the way Warehouses let players gradually collect and pay for ore for ships.

Players can only have up to 150,000 of any ore in their warehouse; if the player places more ore in their warehouse, the game will remove it upon joining a new server. This ore is likely lost and will not be sold for any compensation, so players should avoid gathering too much ore at once. 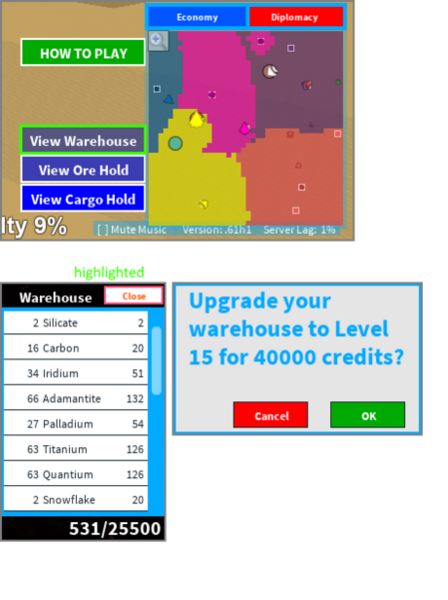