The X-0 is a Pirate Freighter and Pirate mini-boss that has an identical model from the D Class.

The X-0 is an AI ship that has no weapons whatsoever but can call other pirates on the map to its location.

It is a source of loot used in many powerful ships such as the Kraken or Advanced Ships.

It has a random chance to spawn every 60 minutes in public servers, and has no player count requirement. 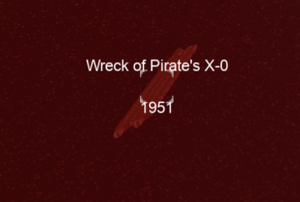 Unlootable wreck outside the border.