The Xenophile is a very fast but fragile Fighter, being one of the 3 fighters to spawn in Frion I, the others being the Striker and Nighthawk.

The Xenophile was one of the first Fighters to be added to the game, along with the Fury. It carries two small Phasers and has a top speed of 300. It has the second lowest health pool of any Fighter in the game. It spawns in Frion I's Lucifer Station and (?)

Like all fighter class ships, the Xenophile has little in the way of an interior. 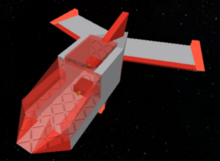