This ship is an Advanced ship. It is a powerful, semi-limited ship that stands out among others of its class and may require special build materials or quests.

A battlecruiser with exceptional speed and powerful weaponry, the Zhen was designed with the most advanced technology available to create a platform capable of engaging ships much larger than itself at little risk. Although it is primarily manufactured by Event Horizon Shipyards for use by their Department of Defense and Acquisitions, the corporation also sells some to independent pilots at an exorbitant price.

Visit this Page to see if this ship is in rotation as it is classified as an Advanced Ship.

The Zhen is a swift and Advanced Battlecruiser.

The Zhen has a naturally flat design, which gives it a huge edge in dog-fighting. Its four Turrets are Advanced AutoLasers and AutoCannons, which help tremendously when it comes to fighting smaller ships.

This ship excels at being an agile PvP Ship with multi-role capabilities due to it's speed, and variety of weapons.

Most weapons will have more difficulty hitting the Zhen. It comes equipped with powerful Spinals, carrying four Small Torpedoes and two Large Phasers that are capable of massive damage if you can hit the ship you are attacking.

The Zhen has a long and extremely thin profile, with detailing and shape extremely similar to that of Nightmare. The ship mainly features a cyber-futuristic appearance; An extremely large spinal barrel spanning half of the ship, 4 Long-angled engines on the back just like its little brother Nightmare. On the middle can be found the cockpit with 2 turrets beside it.

The Cockpit of the Zhen is a closed cockpit with 4 screens and a control panel, just like its little brother Nightmare. 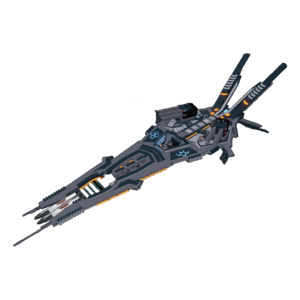 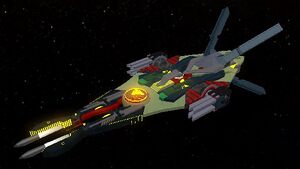 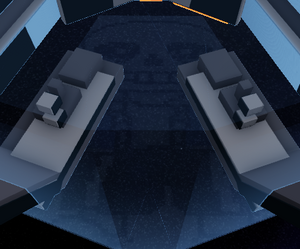