The Glacier is a Limited remodel of the Aegis.

A Freezing Goliath making for the ultimate present!

The Glacier is a Limited ship made for the Christmas Event 2017. It was originally a reskin of the Aegis, with 500 less Shields and 800 more Hull.

The old Glacier had an interior that was exactly identical to the Aegis. The Glacier's newest remodel has drastically reduced the amount of interior the ship had originally. 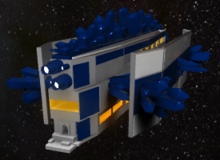