This event is the result of a potentially controversial incident within the Galaxy community. When adding information to this page please write from an unbiased, third-person perspective; and only include factual information.

The Galaxy Civil War II, also known as the Enigma Cache Incident, is known as the worst bug/mistake to have existed in Galaxy and the second biggest incident in Galaxy. Second only to the Confinium Pay-to-win Incident.

This is essentially a repeat of the first Galaxy Civil War (HIGHLY RECOMMENDED THAT YOU READ IT FIRST). Sugondese (smallketchup82) did not start this, it was started a while before Sugondese announced its official start.

Sugondese was the first to call the event(s) the Galaxy Civil War II, meaning it had officially started after Sugondese declared its start in the Galaxy Discord Server on May 18th, 2021 despite the original date of the incident being April 28th 2021.

Patanautic, the newly appointed Shipmaster, decides to add a special artifact to the loot table of Alien Punishers and Decimators. This artifact was named "Dimensional Alloy" and sold for 500 (?) Credits at Mega Base. One would drop per Kneall Punisher wreck, and five for each Decimator, accounting for its rare spawn rate and difficulty in defeating. 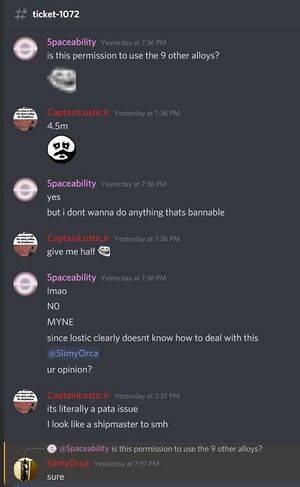 Slimyorca greenlighting the abuse
They were promptly "replaced" with Plasma Batteries, a similar artifact. However, these old Dimensional Alloys could be put in the Warehouse. The player could then travel to Frion I on a public server and interact with the unfinished "Enigma Cache" Quest. For each Dimensional Alloy, 500,000 credits were given to the player.

Sometime before the incident began, a ticket in the Official Galaxy Discord was opened by a player, inquiring about if it was okay to use the obtained Dimensional Alloys to complete the quest. A Galaxy Admin (SlimyOrca) replied with what was essentially permission to do the quest, as seen in the image below:

Afterwards, more players presumably completed the quest under the assumption that it wasn't punishable to do so; as a Galaxy Admin gave permission in response to the inquiry.

The incident went public on April 28th, 2021. However, the fire truly started about a day or two before, within the staff chats. Purpeldazee (whom will be referred to as purple for simplicity) pinged the Galaxy Admins on a matter about an exploiter who wanted their items. She asked if everyone agreed. Two admins, Logan_Bowers (Loggue) and SuperChip15 (Chip) disagreed with the matter. They were threatened with demotion. This started the staff team's discontent towards purple's habits and ways, especially Loggue.

On April 28th, 2021, four Admins, asd1232468 (asd), SuperChip15 (chip, otherwise known as ChipsOmen), Logan_Bowsers (loggue), and CaptainLosticJR (CaptainLostic) were demoted for the abuse of the formerly-mentioned Enigma Cache quest. An old shipmaster or dev had left the quest lying there after he was demoted. The current Dev, PataNautic (Pata) unknowingly added the material needed to complete the repeatable quest. The rewards yielded 500K credits, and the materials were far too easy to obtain.

Players and Galaxy Staff alike used the Enigma Cache quest to gain massive profits. The administrators who "abused" the quest were demoted and blacklisted from ever obtaining a staff position again.

After the demotion of the admins, a riot started on the Galaxy Discord server. People were furious about the demotion of the admins. Purple responded by right-click-banning everyone who insulted, questioned, or even said anything regarding purple's role as Head of Staff. At the same time as the bans, she put a 6-hour slowmode on every channel, but the riot still continued. Purple then decided to lock down every channel and only keep general open. After about 5 hours, the general slowmode was reduced to 2 hours, slowly signalling the opening up of the discord server.

Simultaneously, discord rules were changed to allow staff the power to permanently ban anyone for anything.

Afterwards, screenshots appeared of purple talking to confinium about destroying galaxy, which made people even more furious.

Riots and slowmodes became a daily occurrence. About 2 days later, a now-former moderator, Vsauce, revolted against purple by deleting almost everything in the main Galaxy discord, causing a lot of people to flock to the Galaxy Wiki discord, asking what had just happened. Eventually, they did restore the main Galaxy discord and a semblance of peace emerged.

After 6(?) days, things started to settle down. Then, purple decided to ban Sugondese and demote teentitansgohomee from admin to modeler, again upsetting the community, as Teen was one of the most well-liked admins. When people questioned purple about her demotion of Teen, she simply replied he was “Too busy IRL”, almost the exact same thing she said when she also removed Sean for no reason. She initiated another lockdown, activating a 6-hour slowmode on most channels, and she also went on another ban spree, right-clicking people left and right.

After that, another brief period of peace occurred. This was interrupted by a now also former admin, Nekowok (xUnex), who took a similar approach to Vsauce by banning most of the staff team except Rocket and Purple. Rocket came in and asked what happened and Neko simply answered that they ‘resigned.’ Neko then asked Rocket to have his roles removed and at some point later was presumably banned by either Rocket or Purple. The staff that were banned were brought back and had their roles restored, including Teen's role as admin.

Another notable event was the "Sugon Revolution," where almost everyone changed their names and profile picture to match that of Sugondese, including Rcouret.

About another 2(?) days later, a highly controversial rule was added saying that insults were now ban-worthy and a small riot occurred, but nothing bad really happened. Later, SmokeyJoe and Lightflase were promoted to admin, causing another small riot to happen, as SmokeyJoe was not a well-loved moderator. Sugondese responded by taking the Galaxy Bot down as an act of spite and left the server, although he later came back.

After yet another period of peace and silence, DylanTheVillan101, a now former moderator, was demoted and banned for taking something that Jeffenator said and edited it to make it sound like he's a pedo. This led to another riot and a 30-minute slowmode that lasted a well over average SIX hours.

During this riot, people got very angry about the fact that Dylan was demoted and banned, people started to insult the staff and the Galaxy Community agreed that they lost the "Last good moderator". This was said because Dylan was not as disliked as Smokeyjoe38 and Jeffenator, as the both of them often gave very unreasonable moderations.

While Dylan was banned and the riot was ongoing, Sugondese, a well known member in the Galaxy Community, started to defend Dylan. Sugon got very angry and explained why the staff team is bad, etc. Sugon eventually left the Galaxy Discord Server, vowing to never come back. Shortly after Sugondese left the server, he was (possibly) banned then got unbanned. This caused him to experience something called a "Phantom Ban" and had to use a VPN to rejoin the Discord Server. Where he then made a message replying to a question Smokeyjoe made. In his message, he ended it off saying that "The Galaxy Owner and Galaxy Staff are all clowns. This Discord Server is a literal circus" to which he was banned for Staff Harassment. When he questioned Smokeyjoe about it, Smokey said that he was told to ban Sugondese for 30 days because someone told him to. However he later confirmed that purpeldazee was the one who told him to ban Sugon for 30 days. The warning system at the time did not have a 30 day ban punishment listed in it so the punishment which was given to sugon was actually an act of admin abuse preformed by purple.

The image that got Dylan demoted and banned:

The message that got Sugondese banned:

Then, on the 11th of October, Purple randomly banned 13 people, including 3 newly chosen Trial Moderators. Infern, one of the banned people who was a notorious exploiter, hijacked an admin script and illegally spawned Rift Guardians in every server, causing much chaos. Soon after, Rcouret arrived. After people told him that Purple was randomly banning people, Rcouret finally decided to revoke her perms to ban and demoted her from Head of Staff.