The Viper is a highly maneuverable Frigate.

A light Fighter with great speed and turning.

The Viper is the second fastest Frigate in the game. This ship is good for distracting Starbase Turrets. It is also one of the few ships to be almost completely white in color, aside from one main faction-colored stripe in the middle.

The Viper has a simple interior, with only a pilot's seat, a small black and grey cylinder without a known use, and a tiny screen showing a gyroscope-like readout. 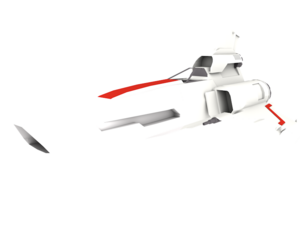 Render of studio model. Note the faction color patterns on wings are not present in-game.