This page contains outdated or inaccurate information.
If anyone can update the page, please do so.
Once the information is up-to-date, this notice can be removed.

This page details faction-generated Starbases. For a general list of all starbase structures found in Galaxy, go to the Starbase Category page. 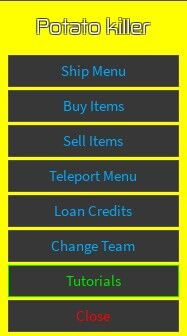 Starbase(s) are the center of operations for player factions and serve as a spawn point for the players in every faction. Starbases are crucial for factions, as they are the places where Ores can be dumped, sold, and bought.

Starbases also serve as safe houses for players as a place to dock and despawn their Ships. When a Starbase is destroyed, the faction it belongs to is also destroyed, unless the faction owns other bases or Planets. The Starbase generates credits based on the amount of power and territory it holds. At the start of the game, it has around 70 credits (0 in Galaxy Arcade). Starbases are stationary and are assigned a random position on the map when their faction is created. All factions and Starbases are color-coded. When you walk near the center of the Starbase, you are greeted with the Starbase menu, from which you can open the ship menu, buy and sell items, access a menu to teleport to other bases, loan credits (which isn't available in Galaxy Arcade), change Factions, and open tutorials. Faction leaders also have additional controls over certain aspects of their Starbases. Even though the Starbase may seem safe, ships docked there may still be damaged, unless they are freighters or miners that have not been in combat recently. The Starbase has an explosion radius of 150 (level 1), 195 (level 2), 254 (level 3), 330 (level 4) and 429 (max level). The Starbase also has a 11% chance of having ore/artifacts in the loot when destroyed.

Starbases serve as both the main target and main point of resistance during Sieges. All Starbases have turrets, but higher-level Starbases are significantly more powerful. Starbases also generate Fighters that players can use to defend, with Furies at level 1 and 5, and Starhunters at level 3. From most ranges, Starbases deal significant damage to both Shield and Hull, but at long range, a Starbase generally deals less damage to Hull than to Shield (which is why many Siege ships like the Ridgebreaker have more Hull health).

A Starbase can be one of 5 levels. Higher levels increase the stats and capabilities of the Starbase. Increasing the Starbase level also allows higher classes of ships to be spawned. Please note that the player must also have a certain amount of loyalty to spawn more powerful ships.

A newly created faction will start off with a level one Starbase. At this level, the Starbase has four docking ports and can only house four players. The Starbase is armed with 2 Heavy Lasers and 2 Heavy Cannons mounted to the bottom of the base, as well as 2 Point Defense Lasers and 2 Medium Flak Cannons mounted on top. A level one Starbase has 12,500 shield health and 12,500 hull health and it is vulnerable against sieges if not protected.

This is the second level for a Starbase. The Starbase must have 3000 base credits and the upgrade can only be performed by the leader of the faction. Level two Starbases gain four more docking ports and a second level, which can be accessed by a teleporting elevator. They can house a maximum of six players. A level two Starbase has 13,250 shield health and 13,250 hull health. It also gains 4 Medium Flak Cannons and 4 Point Defense Lasers mounted on top and increases the explosion radius to 195. A level two starbase can protect itself against weak sieges.

This Starbase level enables the spawning of Dreadnoughts and Carriers.

This used to be the last upgrade level for a Starbase. The Starbase must have 6000 base credits to be upgraded. In addition to being able to house up to eight players, this upgrade also adds regenerating Starhunter fighters to a hangar in the middle of the Starbase. A level three Starbase has 14,000 shield health and 14,000 hull health. Additional armaments added are 4 Heavy LR Lasers, 2 Capital Cannons and 2 Capital Lasers to the top and increases the explosion radius to 254. A level three Starbase might be able to stop a medium-sized fleet if protected with its Furies and Starhunters.

This Starbase level enables the spawning of Prototypes/Super Capitals.

As of version .61f, Starbases can be upgraded to level four. This upgrade level requires 12000 base credits and adds another 750 health to both stats, bringing the total up to 14,750 shield health and 14,750 hull health. As of version .68b, this level also adds an additional level to the Starbase, as well as teleporters at each terminal, meaning a maximum of 12 ships can be docked at once. This level also upgrades the damage output, adding 4 Point Defense Lasers and 4 Medium Flak Cannons, and increases the explosion radius to 330. A level four Starbase might be able to stop big sized sieges if the Starbase Furies, Starhunters and the protectors work with cooperation.

As of version .68b, alongside receiving a remodel, Starbases can be upgraded to level five. This upgrade level requires 24000 base credits and adds another 750 health to both stats, leaving the base with a maximum of 15,500 Shield and 15,500 Hull health each. This level also adds one final floor to the base, giving it a maximum of 16 docking points, rounding out the symmetry of the base. This upgrade adds 4 Capital Lasers, 4 Medium Railguns and one Triple Capital Cannon at the top of the Starbase, and increases the explosion radius to 429. In addition, another hangar containing four Starbase Furies is added, leaving the Starbase with a grand total of 8 Starbase Furies and 2 Starhunters for defense. At this level, a Starbase is incredibly powerful, capable of fending off powerful siege fleets if all fighters are used.

Rich Starbases can keep up with the Economy and quickly level up. Starbases usually struggle to stay above 9000 base credits, so if your Starbase can consistently stay above this mark, it may be considered "rich". There are various ways to make a Starbase wealthy.

The recommended method is to set Orange Restrictions and to Trade a lot while there are no bosses, and when a boss spawns, use the Combat Rewards method ( below ).

This method is the slowest method but effective. It's required to do this method first in order to do a really fast method: Trading.

This method has a player buy materials from a Starbase and then sell at another Starbase for the same or higher price. So the only base losing money is the one that bought the materials from the player.

The process of trading includes mining and dumping your ore. This method requires materials to be in your Starbase before following through. See the Dumping Ore Method.

This method is very effective. Just one attempt gets your starbase to level 4.

This strategy is common throughout the world of Galaxy, not to mention easy.

This strategy works exactly as it sounds: money loans.