The Ridgebreaker is a large, slow Dreadnought-Class ship designed specifically for sieging.

The Ridgebreaker is a strong hull-focused Dreadnought with 4 prominent Cannons protruding from the front and strong Turret firepower. Most effective when paired with the Sagittarius.

You enter the bridge to find a red seat in the middle of the room, with a sign saying "Interior" on the front wall. Much like the Lazarus and Cyber Leviathan. 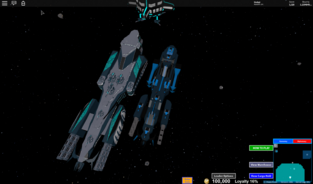 Third Model of the Ridgebreaker next to a first model of a Ridgebreaker.
Retrieved from "https://robloxgalaxy.wiki/index.php?title=Ridgebreaker&oldid=103427"
Categories: