Jump to content
From Galaxypedia
Galaxy has many ways to make money, each with advantages and disadvantages. Knowing when and how to work for credits will greatly help you progress in Galaxy. Each dropdown tab details a specific strategy for making money. Individual pages are also dedicated to Mining, Trading, and Pirating. For getting a profit, see Crashing The Market.

Mining is the root of the economy in Galaxy. Without mining, trading cannot be done. Mining involves using a miner to mine asteroids before dumping the ore to a starbase (including Mega Base). Dumping ore is a miner's way of selling the ore it has collected, and ore in your hold cannot be used for anything else. Mining is slower than trading, but also much safer (assuming that you mine around your own base). Miners fuel the economy and help to keep it alive. Because miners are not armed; they can be a big target; so it's best to keep your miner around your own base - this also helps reduce travel time.

Trading can be one of the most effective ways to make money. It involves buying Material from Starbases and selling it to other Starbases (including the Mega Base). Freighters are the primary ships for trading due to the ships' massive cargo holds. Leaders sometimes avoid having their base bankrupted by putting selling restrictions on their Starbase. The restrictions on selling and buying can be viewed in the Economy tab. These restrictions usually don't last after the base has been upgraded to level 3 or 4. The most common way to trade is to buy the cheapest ore available in the economy (ideally at your own base) and sell it to Mega Base. Trading can be much faster than mining but is also harder to set up. Also, without using ships with large cargo holds, trading can bring lower profits than the average mining run. 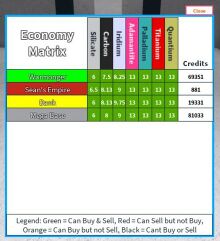 Pirating is a more dangerous way of making money, involving the destruction (and looting) of freighters and miners for money, and occasionally including the claiming the bounty if the target had one. Pirates usually use small fast ships that can kill miners and freighters quickly without taking heavy damage from the base lasers. Common ships for pirating include the Cobra, Sixfold and Gideon, and wealthy pirates may use an Ampharos for some tasks. Pirates normally attack miners and freighters due to the fact that these ships are unarmed and are expensive, with freighters usually carrying a lot of additional loot in their cargo hold. Most pirates have a decent sized bounty, making them fairly easy to spot.

Late game pirates who are more wealthy and familiar with the game often picks up common behaviors from certain players. Using all of this to their advantage they are able to pick out armed capital ships to pirate to gain even more wealth from the large wrecks Dreadnoughts and Carriers can leave behind. These pirates also can lay out a trap and specifically target something they lay eyes on to secure their goal and profit from it with the least casualty.

Many pirates will switch factions frequently in order to pick on the weakest targets, making them poor faction members as they're very likely to backstab their allies (this used to be a major threat but this has died down since the loyalty update)

Server Jumping is very similar to trading. Players try to buy the cheapest ore they can find before transferring it to their warehouse. From there, the player jumps around servers until they find the highest price for that ore. It's best if you have a Freighter and a large warehouse for this strategy. Another way players may use this is by selling to the Mega Base in another server instead of going to another faction.

Buying credits is the easiest and fastest way to make money in-game. Nothing rivals how much money can be gained in a single click. Hundreds of thousands of credits can be made in just seconds.

When certain NPCs are killed (e.g. Galleon, Decimator, Punisher etc.), they will drop Plasma Batteries. Each one takes up 1000 units of cargo, so an Argonaut is the minimum requirement to start. Once a Plasma Battery is looted, the player has to travel to Mega Base, where they can transfer it to their warehouse, then head to Terminal D of Mega Base. There will be stairs leading up to the old Advanced Ship Shipyard, and there are 3 quests, each exchanging batteries for uranium. Completing the quest will remove the battery from the warehouse and deposit uranium of various quantities (100, 300 or 1250 depending on the quest). Afterwards, the player can sell the uranium to a base in exchange for credits