The Grim Reaper was an AI boss from the Halloween Event 2017.

Death is awaiting the end of this ship.

Stay mobile and don't let it outsmart you, however, also try to land as many Spinal hits as you can. If you are fighting in a group, it's best to take different Ships, such as the Ridgebreaker to tank and dish out damage, a fast dread like the Slipstream, to distract the Spinals and Turrets, and a few Leviathans or Nemesises to deal a lot of extra damage. If you had a large team, a powerful Carrier could have done the job.

The Grim Reaper may be removed but is still in the game files and Rcouret can spawn it anytime he likes. 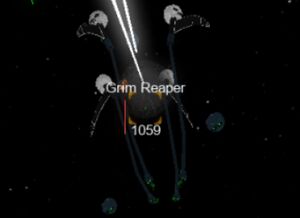