The Blizzard is a hull-shredding Carrier given to players on completion of the Ice Monster's Quest from the Christmas Event 2017.

This Carrier was raised from the Anteres ice sheets itself baring ice and snow with a thick weather system surrounding it, bearing the crystals of ice from the sheets itself. 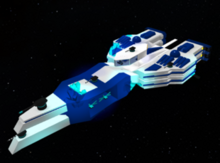 The Blizzard was a part of the Christmas Event 2017. It was the first and only Carrier to have only Dragonflies for its Fighters until they were replaced with its own custom fighters in a later version. The ship was obtained as a reward after completing The Ice Monster's Quest, which has since been removed. Once you lose this ship it is gone, FOREVER! (Unless you lost it to a bug, glitch, or dock-blocking).

Contains a rectangle-like seat that looks out into the front of the ship.